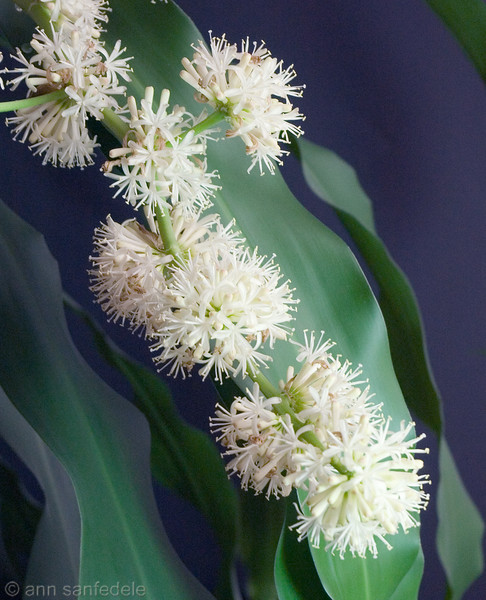 This is the first time this dracena has flowered since I've had it , which is, I believe, well over 20 years. see next photo for the whole plant as it is now. It certainly is fragrant! And there are little droplets of nectar on some of the blooms.


The fragrance was very strong and I had no idea at first that this plant produced it... you will see in the next photo where the plant is in my living room. The blooms are way at the tippy top of the plant, near the ceiling. I thought someone had been cleaning a neighboring apartment with some cleaning agent that was over-the-top scented. It was very strong in the early evening on the day of my 76th birthday (Dec. 10) I couldn't find the source... the next morning it had faded a lot... the next evening I asked a friend to come over and help me sniff out the source - we were baffled. By coincidence, my downstairs neighbors had moved and the apartment was newly painted and prepared for next occupants and an apartment in the next building was also being redone. It wasn't until much later last night (Dec 11) that I happened to look up into that corner as I was setting up lights to photograph something on the big table in the living room. I spent the next hour doing studio shots of it - this one, I think, was the best of the lot. Then this morning I did the quick natural light one that you will see when you hit "next". the plant is also called the fortune plant. My friend Nora gave it to me when she moved out of her apartment. It was interesting to discover how seldom this species flowers and to think how lucky I was that it did so for me to see.